Let us face a hypothesis: What would be the fate of a boy who lost his father before he was born and had to flee along with Mother and siblings during the nightmarish period of partition at the tender age of four? Anybody with common sense would come up with a very pessimistic answer. But wait. The ‘Boy’ mentioned here has gone on to become Madankumar Sharma, the legendary Mouth Organ player of the country!

Madanji, as he is popularly referred to, is  highly appreciated, respected and loved among the Mouth Organ lovers' fraternity all over. At 73, he is leading a happy and healthy life in the city of Pune and is still very active. He plays Mouth Organ regularly and also teaches youngsters the very basics of how to play this instrument.

As I was planning a visit to Pune, my friend  Biren Kothari, a noted writer, biographer and blogger suggested to me to conduct a series of interviews with some accomplished instrumentalists of  Pune. “You can/should upload such matter on your blog”, he said. Though I was sure to meet Madankumarji this time, I would have never thought of this. I was thrilled at the very idea and made up my mind to take up the task.

********
Madankumarji is familiar to ‘Harmonica Club of Gujarat’ Amdavad (of which I am a previlaged member), as he makes it a point to visit us at our Sunday morning meet at Parimal Garden when he is in Amdavad. His visits to the city are not very infrequant as  this is where his SASURAL is! Citing the reference of our club, I called him up once I was in Pune. His response was very warm. “Are Bhai, just drop in. Will have good time together. And let us do away with a formal interview. We will talk over Chaay and Naasta, you decide what to include”, he said.

He also agreed to allow me to record two clips of his playing live with my camera. He invited me to his residence in the evening of Tuesday, 6th of this month. He welcomed me with a warm smile and a warmer handshake. Made me comfortable and then I wondered if the informal ‘interview’ may start. He agreed and Following is what transpired over ‘Chaay and Naasta’.

Born on 10th of October 1943 in Sindh (Now in Pakistan), Madankumar Sharma lost his father a month and half prior to his birth. His mother and three siblings (who themselves were very young) took care that the young boy would miss the father as little as possible. But then yet another stroke of bad luck hit the family when he was barely 4 years old.  In the horrifying times of partition, like millions, this family too had to leave behind everything in Sindh and had to flee to save their lives. They came and tried to settle in Pushkar near Ajmer. His uncle, elder brother to his late father was in Mumbai and he provided all the support they would need. The family shifted to Pune when Madanji was 7 and he has been living in the city ever after.

He saw a Mouth Organ for the first time when his elder brother bought one at the cost of Rs. Four. Madanji  however found it impossible to lay his hands (and mouth) to it as the ‘owner’ of ‘Hohner’ brand Mouth Organ was very possessive about it. The lady luck smiled  as Madanji found access to it once when the elder brother was away! He realized instantaneously that this was something specially made for him. While in school he made friends with one Iqubal Shaikh who was a good singer. He promoted Madanji among school teachers as being a good Mouth Organ player. His elder brother too was pleased with the talent of his sibling and that was when Madanji acquired ownership of his first Mouth Organ. Though it was a Hohner product, that particular Mouth Organ was a Diatonic one which is believed to be incomplete as Indian music tunes cannot be properly manoeuvred using it. One needs a  special variety known as Chromatic version. Those were the days when Indian markets did not offer such sophisticated varieties.  He could procure his first chromatic version in 1960, when his friend Daulat Keshwani bought one for him. This added flavour to his already accomplished playing.

He had become fairly popular among the students of his school and a few more by then. It was now that he got his first break. Manmohan Krishna, the famous actor used to conduct a very popular radio programme ‘Cadbury ki Fulwaree’.  Madanji got a chance to perform in this programme at the tender age of 17. “I was so excited, I would have written more than 100 postcards to friends and relatives to listen to that performance!” he said. With this dose of success, Madanji realized he could do and accomplish much more with Mouth Organ. He acquired a few more Mouth Organs to add to his repertoire.

Next, he started exploring opportunities. He knew he had to struggle hard but he also knew he had the talent to make it to reach the top bracket. He started taking rounds to the recording studios of Mumbai where film songs were recorded. Gradually  his talent was recognized and he was among the musicians who were regularly called for recording of the songs by the likes of Laxmikant Pyarelal , Kalyanji Anandji and Khaiyam to name a few. He was hardly 21 at that time. 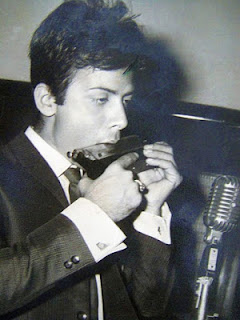 ( A young Madankmar Sharma in a recording session)

His experience over there however, was not very encouraging. He said, “Though I was paid for a full session every time I was summoned, I got to play very few pieces and quite frequently even those pieces would be edited out. So I thought I had to find some alternative”.  He considered cutting records of his Mouth Organ rendition with reputed His Master’s Voice, HMV.

It took three years once he sent a spool of his recording to HMV that he got his first call by the company. R.B.Lele and V.K. Dubey, the officers of the company finally agreed to cut an EP (Extended Play) record with Madanji’s performance (two songs) on one side and that of some other artist on the other. But then the higher authorities thought better and ultimately an exclusive record of Madanji’s  performance on both sides arrived in the market in February 1968. 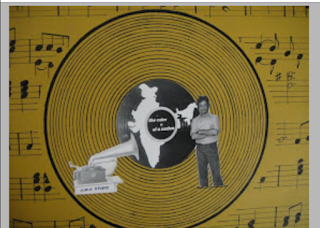 (The photo of the jacket of the record)

“This turned out to be luckiest time of my life as release of my record coincided with my marriage in Feb.1968!” said a beaming Madanji. A few more records of his were subsequently released and sold lterally like hot Pakodas! They were LP (Long Play) type which carried as many as twelwe songs each. All India Radio and Radio Ceylon aired on regular basis, Madanji's recordings.

It was during one of the recording sessions with HMV that Madanji was approached by none other than Enoch Denials, the great Accordion player and arranger of Hindi film music industry. So impressed was Enoch Denials with the prowess of this young artist that he promised  every possible help to Madanji whenever he came from Pune to Mumbai for recording. An overwhelmed  Madanji  said “Sir, like a blind man I would have asked for an eye, but you are providing me with VISION”! This association yielded one more fruit in the form of Van Shipley, the legendary Hawaiian Guitar player. The threesome developed a strong and everlasting bond of friendship and professionalism. 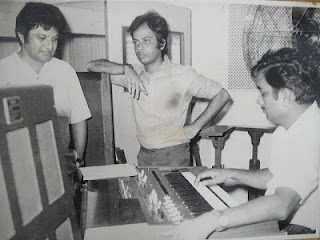 (The photo shows from left to right, Van Shipley, Madankumar and Enoch Denials.)

It was while he was working with the two maestros that Madanji came in contact of Tarachand Baratejiya who had produced ‘Dosti’ the film where Mouth Organ was the hero. Looking at young Madanji and learning about his great command over Mouth Organ, Tarachandji told Madanji that if he had spotted him earlier, ‘Dosti’ would have had a real life hero! Anyway, the bygones were bygones and the life had to go on.

Realizing that additional income had to be generated, Madanji bought a state of art recording machine of those times. He provided technical support to Minoo Katrak, the champion sound recording master of hindi film industry. 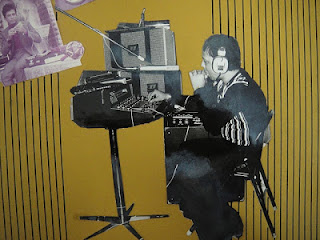 He also brought up his orchestra and produced live shows all over the country and abroad. In the process, his association with Mouth Organ only grew stronger. He spent four years in Europe where his orchestra became quite popular. While in Germany, he visited ‘Hohner’ campus, leading manufacturers of a wide variety of musical instruments including (arguably) the best Mouth Organs in the world. That is where he acquired a gem. The company printed on one side of a rare piece of Mouth Organ, signature of Madankumar Sharma!

(The photo of the self signed Mouth Organ of Madankumarji)

There are only five pieces of this variety and the one in the possession of Madanji stands a very lucrative offer of Rs.10,000,00/-!

For the live recording, he played little portions of two songs which according to him are highly popular with the youth. “Mouth Organ is a fantastic musical instrument. Do not judge it by its size. It has tremendous potential,” said he. Before starting of the recording, I asked Madanji if he wanted to add anything to our 90 odd minutes conversation. He pondered for a while and said this: “ Tell you what, I have been very fortunate in my journey with Mouth Organ. Believe me, I am in possession of more than 86 different varieties of Mouth Organ and I have got ALL of them as gifts! All my life, I have never paid for a single of these!” 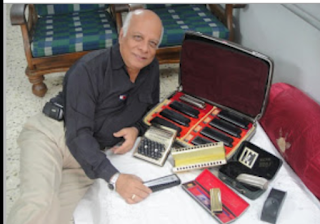 (The photo shows Madankumarji with his collection of Mouth Organs.)

Here are the two songs  I recorded in situ. Please listen carefully. Madanji has demonstrated very effectively, the power of the tiny instrument he has been in love with for last 66 years.


Following  are some strongly recommanded clips.

For those interested, You tube has many more clips of Madanji’s rendition. Several audio CDs and MP3s are also available in the market.

Like every good thing, my meeting with Madanji had to come to end. As we were parting, he bid me good bye with a warm smile, a warmer hand shake and a still warmer hug! Thank you, Sir for what you are and for everything that transpired over that pleasent evening of 6/09/2016.

Piyush
A family loving man with varied interests, not known to make friends easily. Taught Microbiology for a little less than 39 years. Retired in June 2016 as Associate Professor.